After several freezes here in southeast Michigan, today I was surprised to find a plant that was not only still very green, but still flowering.  Its cold tolerance has earned it the name winter vetch, but it’s more commonly known as hairy vetch (Vicia villosa, Fabaceae). 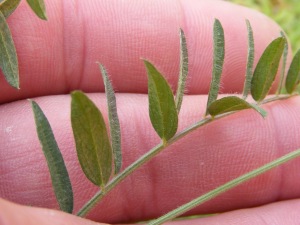 Hairy vetch gets its name from the densely pubescent compound leaves and stems.  Above you can see that the leaflets are covered in white hairs.  Each leaf is terminated by tendrils that the plant uses to trail and climb over other plants.  These tendrils are visible in the first photo above. 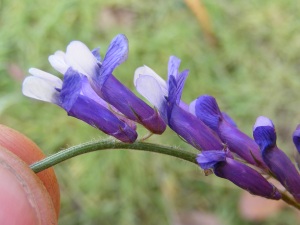 Introduced and naturalized in North America from Europe, hairy vetch has a number of agricultural applications.  Like other members of the bean family, it’s particularly adept at fixing nitrogen and making it available for subsequent plants.  For this reason it’s often used in rotation as a natural fertilizer for organically-grown crops (Owsley 2011).  Hairy vetch is also valuable as a winter groundcover to prevent erosion, a forage crop for livestock, and as a host plant for beneficial insects (Owsley 2011).

Despite its usefulness, hairy vetch can be invasive.  Left uncontrolled, it can persist and spread (Owsley 2011).  I found these plants near a barn on a farm, and I suspect they were introduced in a mix of hay seed that was sown nearby.  They’ve now escaped the field itself and have spread into surrounding areas.

Science and nature nerd.
View all posts by Jeremy Sell →
This entry was posted in Botany, Random Plant and tagged invasive, nature, plants. Bookmark the permalink.