Last August I was out on business in central California and had a few hours to see Yosemite Valley at Yosemite National Park.  In January I was out there again and had time for another quick visit.  As with the last visit, I was again greeted by the smoke from a managed fire on the approach to the valley:

Once in the valley, the thing that struck me the most was the complete lack of snow:

The elevation in this area ranges from around 4000 feet to nearly 9000 feet.  The park is on the western, windward, relatively moist side of the Sierra Nevada mountains.  The valley itself averages over 12″ of snow in January.  Despite all this, the weather had been unusually dry, and there was no snow to be found.  The towering landmarks were nevertheless spectacular as usual: 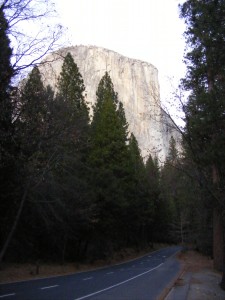 Heavy snow is often a problem in the park, and many roads are closed during the winter because of this.  A couple of weeks ago I learned roads were reopening a month early thanks to this mild and dry winter.

Traffic congestion can also be a problem in Yosemite Valley.  In August I was unable to make it all the way up the valley because of the gridlock.  This time around there was almost no traffic, and at the top of the valley I was treated to some scenic views from the Merced River. 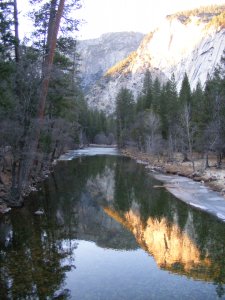 On the way out after sunset I got one more view of the river: 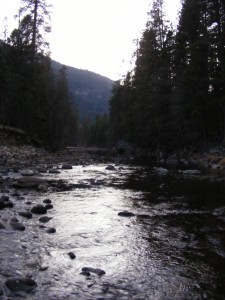 Although I only had a couple of hours of daylight to revisit this spectacle of nature, it was worth the drive.